Stars and stripes: WNMU runner to compete in race for USA team 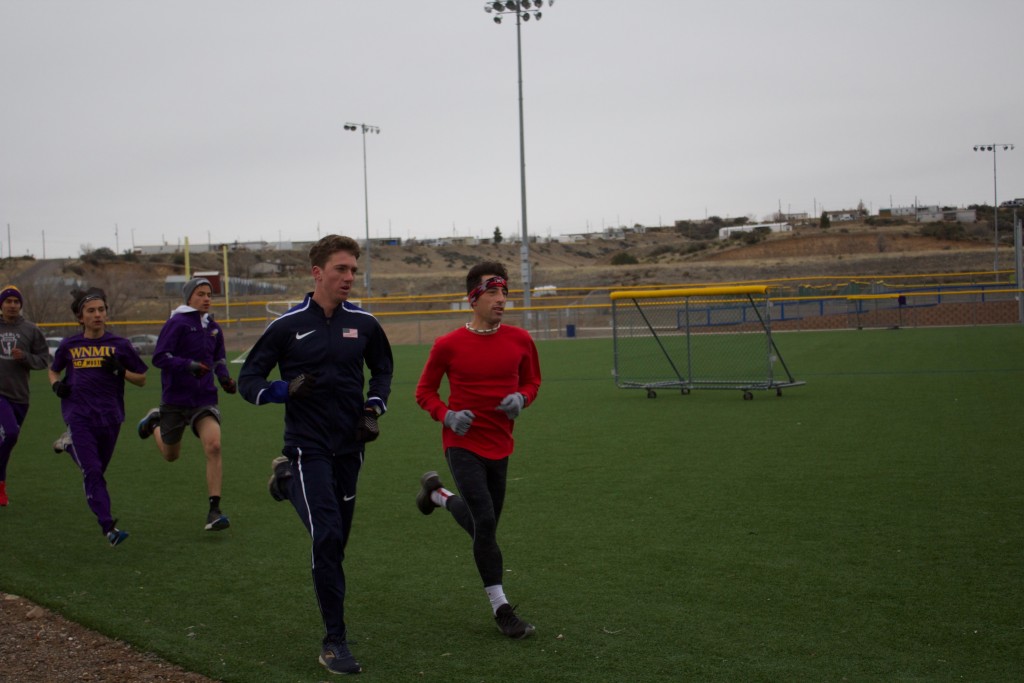 Daniel Beam, decked out in USA gear, runs with his teammates at Scott Park on Friday. Running with him are Roberto Cota, Sebastian Mendoza, Erick Arambula and Michael Anzures. Beam will be representing the USA team Saturday, Feb. 29, during the 2020 Pan Am Cross Country Championships.
(Press Staff Photo by C.P. Thompson)

On Jan. 18, Beam, a freshman and on the university’s cross country team, made this possible by placing ninth in the 2020 USA Track and Field Cross Country Championships junior men’s division.

“After our cross regionals, we take a break and then we resume training … back through the Christmas break,” said WNMU head cross country coach Macario Campos.

Learning that the Cross Country Championships were in San Diego, he asked Beam about his fitness and if he would like to compete. Beam fit the criteria to be in the race.

“I think it was six weeks till the championship to get some quality stuff,” Campos said. “We just said we’re not going to get ahead of training because that’s how we could risk injury. I just said, ‘You have enough fitness right now to get a little quality stuff, and see how it goes out at San Diego.’”

Beam didn’t see any reason not to compete in the race.

“I thought, ‘What did I have to lose?’ and that it would be a fun experience,” he said.

Campos said that the division Beam was in, there were high school seniors and college freshmen. “When you place in the top 10 they have to declare that same evening — USA Track and Field has to have a declared team.”

“I wasn’t expecting it, but it was a pleasant surprise,” Beam said.

Campos told Beam to take his passport, as that is one of the criteria to be eligible to be on the USA Track and Field team.

“We went to go have lunch,” Campos said. “It was like, ‘Oh, shoot.’ We got the call. So then we knew he just had to go and fill out all the documentation, present his passport and all that. So we rushed over. We already placed the order for our lunch … we’re telling the waitress, ‘Hey, hurry up.’”

Being part of the country’s national team is a dream for Beam.

“It has always been a dream to represent team USA,” he said. “It’s almost a little overwhelming. It’s still barely setting in.”

According to the USA Track and Field website, Beam is in the U20 Men division, joining five others from states like California, Ohio and Michigan. There are also U20 Women, Senior Men and Senior Women divisions. The 2020 Pan Am Cross Country Championships will be held Saturday, Feb. 29, in Victoria, Canada.

“The U20 men’s race will be over an 8km distance, and the women athletes will run 6km,” the website states. “Both the senior men and women will run 10km. The course features much more challenging terrain than previous versions of the event.”

Susan Hazzard, USA Track and Field spokesperson, said in an email that the Pan Ams are usually competitive. However, the USA team typically does well.

“We expect the same this year,” she said. “Representing the U.S. is a wonderful opportunity for any competitive athlete. The best of the best are on this team and we are looking forward to the competition.”

“The other element is the weather,” he said. “Race conditions are supposed to be 35 to 45 degrees. It’ll be muddy, I’m sure, but it won’t be as slushy and torn up as it can be if it rains the day before. That’s what cross country is about.”

Beam said that the course will most likely be muddy, but he will have an advantage as far as oxygen goes — Victoria is just above sea level. Campos said it is key to be “fit” at the time of the race.

“This next week we are just tapering down, which is cutting back on some mileage — the overall mileage,” he said. “Right around Sunday’s when all that tapering begins.”

“We’ve been doing a lot of training,” he said. “We do a lot of long runs. Obviously a lot of hills. On the level that we can control, we have been doing very well. The team has been incredibly supportive.”

Not only has the team been supportive, but also those at the university. During the Urban Challenge Fun Run last Saturday for Territorial Charter Day, folks congratulated him.

“Even the people of Silver City have been supportive,” Beam said.

Beam has received all the USA gear that he will be wearing, and coaches and those “in charge” will email him what he needs to prepare and the date of flying out.

Campos said Beam being in the race is a great thing for the WNMU cross country team.

“For an athlete in any sport to put on the stars and stripes with USA on there, that’s pretty neat,” he said.

Beam was born in North Carolina but was raised in Rio Rancho, where he ran for the cross country and track teams in high school. He was a sprinter in track his freshman year, then went out for cross country his sophomore year. He finished all-state his senior year in both sports.

Beam said running allows him to look back at the success he’s had so far and what the sport can lead to — it gives him something to “strive towards.”

When visiting other colleges, Beam didn’t get that welcoming feeling.

WNMU “had a very homey feeling,” he said, adding that the university has supported him in everything from classes to athletics.

Beam is studying history but isn’t sure what his career will be.

“He’s a strong runner … in the sense of when courses are challenging, he fits that course,” Campos said. “He’s just one of those gutsy, tough runners.”

Beam said that his family and Campos will be going to see him compete in Canada.

“If he has a great race, the USA team has a great chance to get on the podium, because it’s a pretty solid team,” Campos said. “I think the more rugged conditions than it can offer … then that’s just going to benefit his performance because he does really well in those types of races.

“He’s a great individual,” he continued. “To be able to have someone on our roster that will be representing team USA is great. And he’ll wear that with pride and do the maximum that he can.”

C.P. Thompson may be reached at cp@scdailypress.com.